This is an old page! Please view the new platform summary HERE. You can also view all the detailed plans HERE. 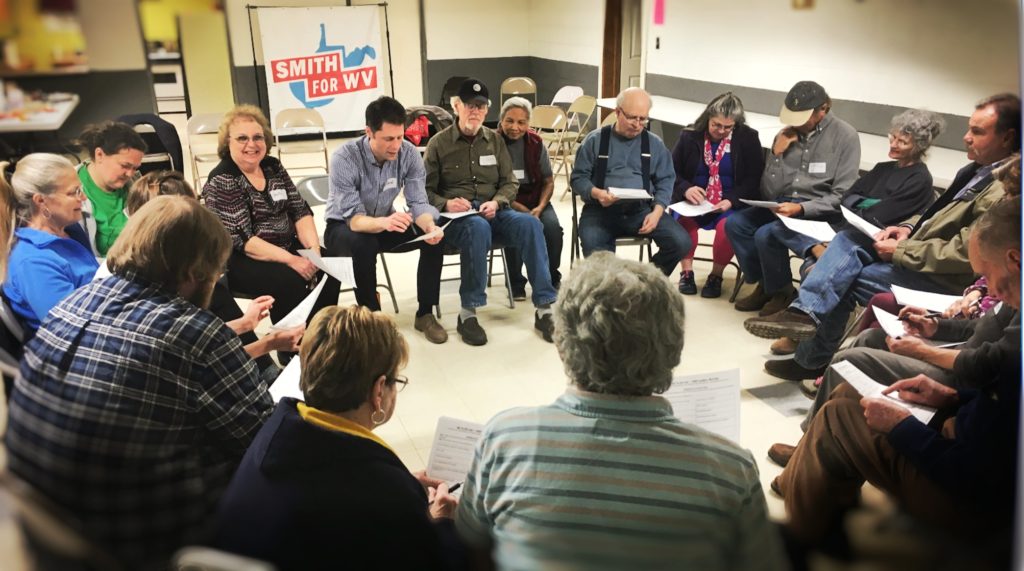 For most families, the West Virginia economy has spent four decades in free fall. Compared to our grandparents’ generation, there are fewer jobs. Those jobs pay less. They are harder to get and harder to keep. West Virginia workers are more productive than ever. In fact, this is the wealthiest time in our history. But our wealth ends up in the pockets of executives at Frontier, Rockwool, Patriot Coal, Wal-Mart and a hundred other out-of-state companies–instead of our own. It is no wonder that suicide, divorce, mental illness, and drug overdose death rates are all at or near historic highs. We face not just an inequality of wealth and opportunity, but an inequality of pain. The people who have the most bear the least. And the people who have the least, bear the most. If we do nothing, our kids’ generation will be the first not to outlive their parents.

For generations, the rich have asked us to put our faith in them. It never works. We will only win the change we need by putting our faith in ourselves. And we know this. We will not win by trying to make the Good Old Boys Club accept us. Instead, we must be brave. All of us. No politician led the mine wars. No politician led the educators strike. Workers did. Months before the strike, teachers started going up to the capitol to begin their fight. When the teachers were told by politicians on both sides of the aisle that winning a 5% raise was impossible, that PEIA funding was impossible, they did not give up. They fought harder. They risked more. Instead of compromising or retreating, they chose sides and prepared to fight. They chose the side of teachers, cooks, bus drivers, parents, and students–against for-profit education companies. And in the end, they changed what was possible.

The document we have ratified is the boldest state platform in modern American history. Bar none. It consists of more than 100 pages, 32 separate plans, north of 250 policy recommendations. It is a detailed plan for how we shift wealth and political power back to the people of our state. In the government we win, more than $2 billion will return to our land, our neighborhoods, our local businesses, and our pocketbooks–per year. In the government we win, surface owners and farmers will lead the DEP. Union workers and small business owners will lead the Department of Commerce. Foster parents, people with disabilities, veterans will run the Department of Health and Human Resources. Government will no longer be led by lobbyists and bureaucrats. It will be led by people like you and me.

To win this government, we must do what the teachers and school service personnel have done. We must do what Bill Blizzard and Sid Hatfield and Mother Jones did a century ago, during the Mine Wars. We must do what our state’s founders did when they set up camp in Wheeling more than 150 years ago and founded their own Virginia.

We must choose to stand on the side of West Virginians who work the hardest and hurt the most, and against those who profit off of our work and pain.


We choose the side of children.

We will pass the nation’s first wealth tax in order to fund the nation’s most ambitious loan forgiveness plan to keep and bring our kids home. We will guarantee child care for every working family, career and higher education for every dedicated student, and more than $300 million to build a public education system that works for every kid, no matter their zip code, ability, or parents. That means funding PEIA, teacher raises to match neighboring states, and a curriculum that lets teachers teach. We will choose arts and music and cursive and balancing a checkbook and entrepreneurship and life skills and career education… over endless testing. We will finally answer the mandate set forth by Recht Decision, and promise equality in education.


We choose the side of the sick.

We will fight for Medicare for All at the federal level. At the state level, we will fight for the nation’s most aggressive price caps for medicine and health insurance prices. That means a state Pharmacy Benefits Manager, price caps for life-saving drugs like insulin, a Health Insurance Commissioner, tripling support for free health clinics, and a state-based public option for individuals and small businesses. Cost savings will go right back to consumers, as well as volunteer firefighters, EMS, and other first responders who deserve workers comp, higher pay, and a training system that makes sense. And in the end, we will win our fight against mental illness and substance use disorder, because we will choose the side of people in recovery who have crafted the nation’s most ambitious plan for harm reduction, prevention, recovery jobs programs, trauma-informed schools, and an effort to push resources and recovery centers into every community of our state.


We choose the side of small business.

We will stop forcing our entrepreneurs to play a rigged game with out-of-state monopolies. Every penny saved by ending corporate tax giveaways, exposing sweetheart deals, and making PILOT agreements more accountable is a penny earned for the nation’s most ambitious set of tax breaks, friendly regulations, and capital investments for small businesses, entrepreneurs, farmers, artists, and cooperatives. We will establish a WV Arts Council, invest in outdoor recreation, and fully legalize cannabis. We will build the broadband middle mile and invest in local ownership of the last mile–to break the Frontier monopoly and embolden every student, every distant worker, every entrepreneur who wants to make West Virginia their home. At long last, we will open the State Bank of West Virginia to speed up small business growth, infrastructure financing, and eventually to start returning dividends to the people of our state. This is how we rebuild our economy. Not by pretending to be Pittsburgh or Denver, not by wooing Amazon and Wal-mart–but by investing in our small towns and making West Virginia the best place in the country to live, work, and start a business.


We choose the side of taxpayers.

Our aim is not merely to change who sits in the Governor’s seat. We must also change who governs. We will limit campaign spending, implement automatic voter registration, end election buying, tax and restrict corporate lobbying, end the revolving door, and adopt the most ambitious program in the country for the public financing of elections. The size of your bank account should have no correlation with your ability to serve the public. We need cleaner elections and transparent governance: regional deputy governors to bring state government to you, grantwriters bringing millions to every holler, an office of the Inspector General to police waste, a Public Service Commission run by and for consumers–not industries–and taxpayer councils to ensure that every agency in the executive branch is run by the people who hurt the most and work the hardest… and not those who profit from our pain and our work. We will also fix the damn roads, by listening to our engineers instead of political appointees, by choosing maintenance over catastrophe, by taxing the trucks that do the damage, and by choosing accountable, union labor and delivering on the pay scale raises promised to DOH workers.


We choose the side of workers.

We will pass the nation’s most ambitious Workers Bill of Rights–reversing Right to Work, reinstating Prevailing Wage, Equal Pay for Equal Work, Earned Sick Days, Family Leave, a beefed up WV Jobs Act, and collective bargaining for all state employees. We will pass a $15 minimum wage–with corresponding small business tax cuts–so every worker can live with dignity and every small business owner can afford to pay. We will fix our upside-down tax system, so that the people who have the least no longer pay the most. We will win the nation’s strongest Earned Income Tax Credit and end off-shore tax havens. We will launch Corporate Crime and Political Corruption divisions in our state police–so that our state’s white collar criminals can no longer hide. Most important, we will raise the severance tax on natural gas to pay for the most ambitious public works program since the New Deal–more than 32,000 living wage jobs created in water and broadband infrastructure, the arts, outdoor recreation, public services, senior services, and our small business revolution.


We choose the side of coalminers and environmentalists, gas workers and outdoorsmen.

We know that safe water and rich land are not the enemies of economic development. They are the foundation for it. We will win the most ambitious land and water protections in Appalachian history. We will choose local food and farmers over Big Agriculture and pass a new Homestead Act that chooses local landowners and counties over out-of-state landholding companies that steal from us everyday. We will multiply by 10 the costs for water violations and gas permits–and use their money to rebuild, modernize, and consolidate our 690 crumbling water and sewage systems. We will pass the Modern Jobs Act, Power Purchase Agreements, establish an Office of Outdoor Education, and more. We will squeeze every cent we can from coal and gas executives, so that every coal miner and gas worker is guaranteed a job long-term and West Virginia will lead the clean energy economy for generations to come.


We choose the side of every one of our people who has been asked to carry too much pain, for too long.

We choose the side of responsibility. Every dollar in this plan is accounted for. But we won’t win just because these plans add up. We will have to do what our grandparents did before us, and fight for it. The harder we fight, the more we will win. People will say this plan is impossible. It is up to us to change what is possible. West Virginia Can’t Wait.

Thank you for reading this summary. We will release all 30 + plans (with details and costs) in the same manner they were created–carefully, and with the help of thousands of West Virginians. Thousands of us wrote this platform at 136 Town Halls, in 550 additional visits to small businesses, recovery programs, churches, union halls, and homes. We wrote this platform in more than 10,000 conversations, voter-to-voter, face-to-face. We wrote this platform in your county team meetings and constituency team meetings. We debated and disagreed. No one got everything they wanted–not even our candidate. This platform quite literally contains the words and stories of thousands of West Virginians.

In the coming weeks and months, keep an eye out for the detailed plans, which will appear one by one on a Platform Plans page here and in the top navigation. With each release, we’ll ask for your support, critique, and help spreading the word.

Got questions about the rollout? Email Lissa@wvcantwait.com. Want to schedule a time to talk directly with our candidate for Governor Stephen Smith? Email him at Stephen@wvcantwait.com.