We believe in the principle of “one person, one vote.” We’ll have a government that works for all of us, once we make sure the wealthy few can’t buy it. 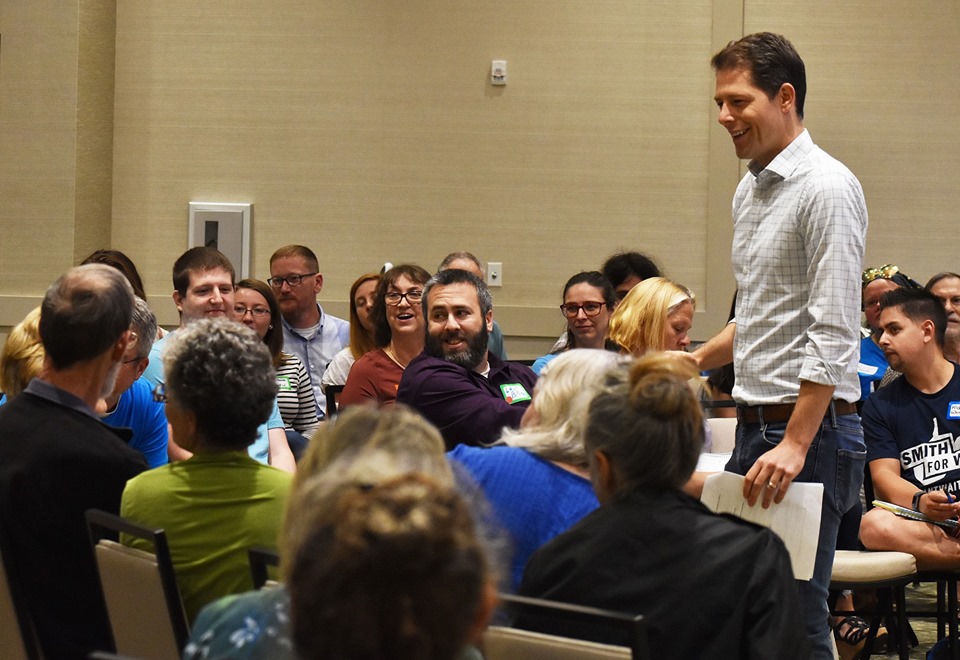 We held more than ten thousand voter-to-voter conversations last summer. We asked people what they would do if they were governor, what issues kept them up at night.

There was one answer that came up 5 times more often than anything else. It came up more than roads, or schools, or safe water, or overdose deaths, or jobs.

As one of our union buddies put it: “If you aren’t at the table, you’re on the menu.” And we’ve been on the menu for too long.

We see it everywhere. 88% of West Virginians oppose giving public money to private charter schools, but the bill passed. The public relations guy for the controversial Rockwool facility in Jefferson County is also the House Majority Leader. Last May, instead of funding a state Black Lung Pension Fund for miners and a nursing home in Beckley for veterans, lawmakers voted to give $60 million more to out-of-state coal executives.

How? Through gaps in the law relating to contribution limits that say that an entire union can only contribute $2,800 to a state campaign, while a millionaire can kick in unlimited money to his or her own campaign to run. Corporate executives and shareholders can form PACs and 501-c4’s to get around that limit too. And lobbyists have nearly free rein in their access to candidates and government officials. The end result is always the same: if you have more money, you have more say.

Fast forward to election day, and the same corporate PACs that got the same wealthy people elected, now have those officials’ ears. It’s no surprise when our black lung pension fund is traded in for tax breaks for coal barons. Or when issues like campaign finance reform, severance tax raises, and full cannabis legalization don’t even make it onto a committee agenda.

Here’s how bad it is: researchers estimate that companies receive a return on investment (ROI) from lobbying consistently higher than hedge funds (with some studies suggesting ROIs of 5,900% to 22,000%).

What matters in politics is who you serve. Right now our political system is a rigged game that serves the wealthy. It doesn’t have to be this way. We will change the rules.

This plan is built to be revenue neutral.

A lobbying fee will generate roughly $1 million (assuming roughly 95 out-of-state companies, and 500 local organizations). The lobbying tax will generate roughly $5-10 million / per year; lobbying expenditures are difficult to track (currently West Virginia only tracks direct expenditures such as meals, etc.; not the salaries paid to lobbyists), and it is reasonable to suspect that some lobbying expenses will be curbed to avoid the tax. Independent expenditure organizations spent roughly $3 million in the 2018 election. At a 1-for-1 tax, that will net another $3 million every two years.

These reforms should be phased in over time, and will likely be supplemented by the half-penny wealth tax.